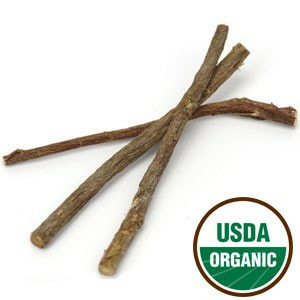 Licorice root is one of the most widely used herbs worldwide and is the single most used herb in Traditional Chinese Medicine today. It was used by the Egyptians as a flavoring for a drink called Mai-sus, and large quantities were found in the tomb of King Tut for his trip into the afterlife. Pliny the Elder recommended it to clear the voice and alleviate thirst and hunger. Dioscides, when traveling with Alexander the Great, recommended that his troops carry and use licorice to help with stamina for long marches, as well as for thirst in areas of drought. In the Middle Ages it was taken to alleviate the negative effects of highly spicy or overcooked food. It was also used for flavoring tobacco, and as a foaming agent in fire extinguishers and beer. In a recent survey of Western medical herbalists, licorice ranked as the 10th most important herb used in clinical practice. An astonishing number of Chinese herbal formulas (over 5,000) use licorice to sweeten teas and to "harmonize" contrasting herbs. Its first documented use dates back to the time of the great Chinese herbal master Zhang Zhong Zhing, about 190 AD, but it was certainly used for many centuries prior to this. In 1914 the Chicago Licorice Company began to sell Black Vines, the first in a very long line of licorice based modern candies.