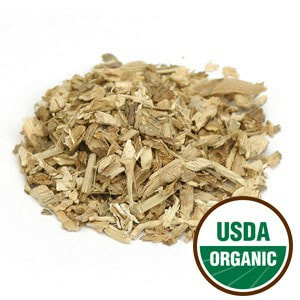 Chicory Root, known scientifically as Cicorium intybus, is one of many organic herbs that are not only used therapeutically, but for nutrition as well. Both the leaves and dried and ground Chicory Root are used as medicinal herbs and in the kitchen as a spice, boiled up as a side dish and used both as a flavoring for coffee (New Orleans coffee with chicory was once world-famous) and as a coffee substitute.

When used as therapeutic herbs, cut Chicory Root is dried and ground into a powder.

Like other herbs and spices in bulk, chicory root can be used to flavor foods during the cooking process . Unlike some other natural herbs and spices, Chicory is fine to eat in salads as well as a pot green like spinach. In addition, this organic bulk herb is "Generally Recognized as Safe" by the U.S. Food and Drug Administration, and is among the safest of bulk herbs for sale, but you should always consult your healthcare professional before beginning any herbal regimen.