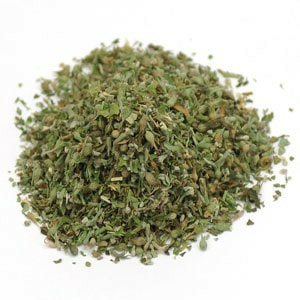 While humans may find dried Nepeta cataria leaves to be effective when taken as an infusion, to their pet felines, Catnip Leaf is in fact not a medicinal herb but a narcotic. Felines have a sense of smell that is far more developed than that of humans - by a magnitude of several million. In fact, it has been suggested that felines perceive scent in the same way that humans perceive color. Just as certain wildcrafted herbs can cause humans to have visual hallucinations, so too does catnip leaf cause your tabby to experience olfactory hallucinations - which, if the typical cat response is any indication, are highly pleasurable, but ultimately harmless.

Ground Catnip Leaf can be used as a tea. If you live with a cat (or more than one), you'll want to buy organic bulk herbs like Nepeta cataria in sizable quantities to keep your kitties entertained. In fact, this natural herb, when given to your cat, is more likely to keep you entertained!